The Blastobasidae (Blastobasid Moths) are moths of the superfamily Gelechioidea. They occur almost worldwide, but are most diverse in North and South America, with more than 275 described species and more to be studied.

Blastobasids are small, nocturnal moths with narrow wings. Most species are uniformly dull-colored, usually reddish-brown, without crisp streaks or large wing spots. Wingspan ranges between 12-24 mm, more than 10x as much as the thorax width.

Larvae are typically slender and cylindrical, with 10 prolegs, and feed openly, usually on dead organic matter. Many species feed on detritus associated with the nests and galleries of other insect species and some species are stored foodstuffs’ pests. The pupae are concealed and are not protruded during hatching.

The following species are representative species of the Blastobasidae moths that have been photographed on the island of Crete. You can obtain more information about each species, by selecting the relative species icon. The list of Blastobasidae species is nondefinitive. 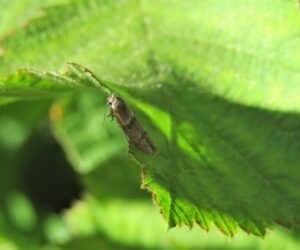