The Choreutidae (Metalmark Moths) is a family of medium-sized micromoths whose taxonomy has been long disputed. Nowadays, it is considered to represent its own superfamily Choreutoidea (Minet, 1986). Previously it was placed in the superfamily Yponomeutoidea in the family Glyphipterigidae and in the superfamily Sesioidea.

The family is most species-rich in the tropics, and much of its richness is still unknown to science. Currently, 406 species of choreutids are described in worldwide distribution.

They often bear metallic scales, except for some tropical species such as the genus Saptha which are quite spectacular, with bright green metallic bands. Most of them are dark-colored, with black or brown wings marked by metallic gray, white, or silvery-blue, and have iridescent markings on their wings. They have broad wings (wingspan 0.9-1.4 cm).

These small moths are mostly diurnal and some are also attracted to artificial lights. They have a jerky, pivoting behavior, and may fluff up their wings at an extreme angle.

Larvae are slender with elongate abdominal prolegs, living externally in slight webs, from which they graze on leaf surfaces. The food plants of many Choreutinae occurring in the temperate region and some tropical species are known; i.e. Asteraceae, Betulaceae, Boraginaceae, Fabaceae, Labiatae, Moraceae (mainly Ficus), Rosaceae, Sapindaceae, and Urticaceae. Most species skeletonize leaves often among silken webbing.

The following species are representative species of the Choreutidae moths that have been photographed on the island of Crete. You can obtain more information about each species, by selecting the relative species icon. The list of Choreutidae species is nondefinitive. 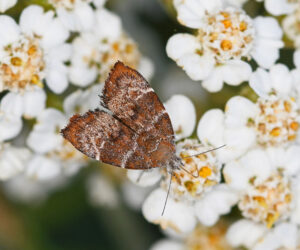 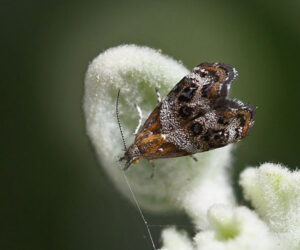