The family Drepanidae (Hooktip moths, False Owlet moths) is a family of moths with about 660 species described worldwide. They are medium-sized, broad-winged moths with the distinctively hook-shaped apex to the forewing and brown or mottled gray markings. The proboscis is reduced in size or absent.

The Cilix species bear no resemblance in color or form to the other Drepanidae species and lack the characteristic hook-tips to the forewings. When at rest they appear to resemble a bird dropping.

They are nocturnal species and are regularly attracted to light. They can sometimes be found at rest on vegetation during the day. The larvae of many species are very distinctive, tapering to a point at the tail and usually resting with both head and tail raised. They usually feed on the leaves of trees and shrubs, pupating in cocoons on the ground, sheltered by fallen leaves. Larvae lack rear legs.

The following species are representative species of the Drepanidae moths that have been photographed on the island of Crete. You can obtain more information about each species, by selecting the relative species icon. The list of Drepanidae species is nondefinitive. 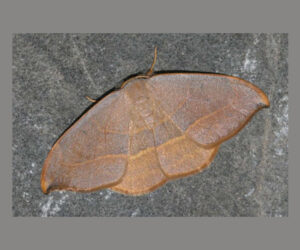