The Adelidae (Fairy Longhorn Moths) are a family of monotrysian moths that was first described by Charles Théophile Bruand d’Uzelle in 1851. It was previously placed as the subfamily Adelinae within the family Incurvariidae.

Most of the species have a metallic coloration, at least partial, and others have a dull coloration. Adelids are best known for their enormously long antennae, often 1-3 times the forewing length, and are usually much longer in the male.

Many Adelids are diurnal species; Fairy longhorn moths feed in the sunshine on nectar from the flowers of herbaceous (woody) plants. Some species are swarming around the tips of branches with an undulating flight.

They are usually closely restricted to particular host plants, in which the females insert their eggs into the base of the ovaries of unopened flowers or just lay among leaf litter. The caterpillars construct flat, portable cases, completing their development on the ground and feed on fallen or lower leaves of host plants.

The following species are representative species of the Adelidae moths that have been photographed on the island of Crete. You can obtain more information about each species, by selecting the relative species icon. The list of Adelidae species is nondefinitive. 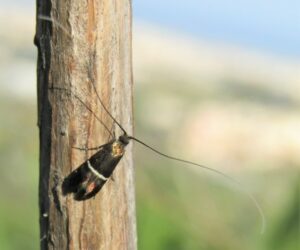