The family Bombycidae (Silkworm moths) is among the most well-known group of moths because of the famous silkmoth Bombyx mori (Linnaeus, 1758), native to northern China and domesticated for thousands of years. Another well-known species is Bombyx mandarina (Moore, 1872), also native to Asia.

Silkworm Bombyx mori (Linnaeus, 1758) is a domesticated silk moth. It is a typical representative of the lepidopteran insects and has great importance in agriculture and the economy. Xia et al. (2004) termed the silkworm B. mori “economically important” due to its use in the silk industry to maximize silk fiber productivity. There are currently more than 1000 strains of domesticated silkworms harvested throughout the world. Bombyx mori has become a model insect, attracting wider attention from fields such as genetics, physics, and biochemistry (Goldsmith et al. 2005). It is also the first species of Lepidoptera in which the whole genome was sequenced (Xia et al. 2009).

The following species are representative species of the moths that have been photographed on the island of Crete. You can obtain more information about each species, by selecting the relative species icon. The list of Bombycidae species is nondefinitive. 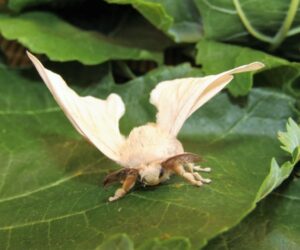