The family Coleophoridae (Case-bearers or Case Moths) is a family of small moths, belonging to the superfamily Gelechioidea. The family is unevenly distributed on all continents with the majority found in temperate zones of the northern hemisphere. It is very likely that they are native to northern Eurasia concerning that they are common in the Palaearctic, and rare in sub-Saharan Africa, South America, and Australia.

Case-bearers are generally small and slender in shape. They are mostly dull-colored, yellowish, white, gray, or brownish moths, often with linear, pale, or dark streaks on the forewing. The margins of their wings usually consist of a “fringe" of hairs. Initially, the caterpillars feed internally on the leaves, flowers, or seeds of their food plants. When they emerge to feed externally, they usually build a protective silk case covered with frass, sand grains, or bits of plant material and feed outward as far as possible without leaving the affixed case.

The following species are representative species of the Coleophoridae moths that have been photographed on the island of Crete. Identification is based on general indications but not the certain definition of the genre; being very small in size they are very difficult to catalog, if not through microscopic examination. You can obtain more information about each species, by selecting the relative species icon. The list of Coleophoridae species is nondefinitive. 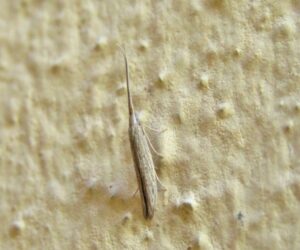