The family Zygaenidae (Burnet or Forester moths) is aworldwide family of dissimilar moths, the majority of them tropical, but nevertheless quite well represented in temperate regions.

They are medium-sized day-flying moths(wingspan 5-50 mm) exhibiting a large number of remarkable specializations. They have smooth scaled head and labial palpi, and the antennae are often thick and either clubbed in both sexes or bipectinate in males and narrowly bipectinate or filiform in females. Glands located between the eyes and the base of the proboscis produce a whitish or yellow liquid or foam when the moth is disturbed.

They generally have bright metallic coloration, and often prominent spots of red or yellow. Their bright and vibrant colors serve as a warning to predators that they are distasteful, and contain toxic substances (i.e. HCN) throughout all stages of their life cycle (aposematism). They form mimicry complexes based on these toxins.

Zygaenidae are usually found in open flowery habitats, often in large numbers, especially in coastal areas, where they are frequently observed as adults visiting flowers in bright sunshine. They have a slow, fluttering flight and during dull weather, they are more difficult to detect, retreating deep into the vegetation. They are colonial in their habits and are most active in bright sunshine.

The eggs are deposited in rows, clusters, or overlapping patches. Larvae are stout and may be flattened. They are predominately green with black markings and hibernate during winter months concealed low down in the herbage and are not easily found. Most of them feed on herbaceous plants, but some are tree feeders.

Pupation for most species takes place inside a paper-like cocoon, which is sometimes attached to the stems of marram grass and other vegetation.

The following species are representative species of the Zygaenidae moths that have been photographed on the island of Crete. You can obtain more information about each species, by selecting the relative species icon. The list of Zygaenidae species is nondefinitive. 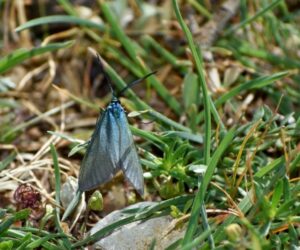 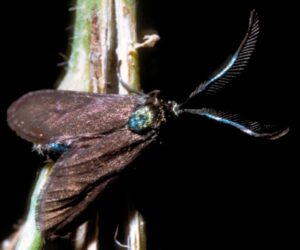 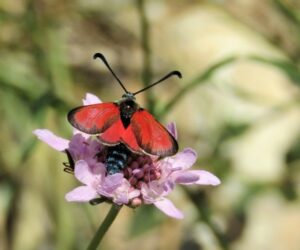